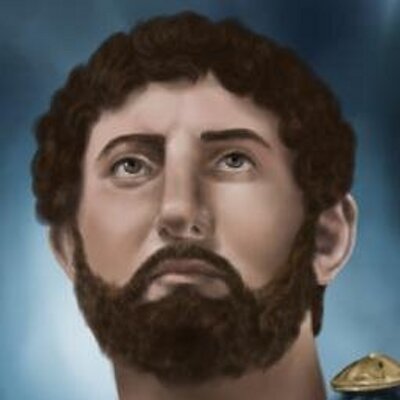 “The name of Hadrian’s host at Athens has not survived, but we can make a guess. One possibility is Gaius Julius Antiochus Epiphanes Philopappus.

He was one of a breed of rootless multimillionaires in whom Greek, oriental, and Roman cultural attitudes mingled”.

Already we have considered, in a set of articles, such suspicious likenesses, or “mirror image” reflections, between the Roman loving Seleucid, Antiochus IV ‘Epiphanes’ and the emperor Hadrian the Grecophile:

Antiochus ‘Epiphanes’ and Emperor Hadrian. Part One: “… a mirror image”

as to wonder – with quite some conviction – whether (from a revisionist’s perspective):

Does not Hadrian even replace Antiochus ‘Epiphanes’ in certain Rabbinic traditions as the foreign tyrant king of the Maccabees?: “The tyrant in the rabbinic versions, however, is not Antiochus Epiphanes but Hadrian: “Hadrian came and seized upon a widow …” (S. Eliyahu Rab. 30); “In the days of the shemad [the Hadrianic persecutions]…” (Pesiq. R. 43)”.

Again, in Part One of this particular set:

Now, supposedly three centuries later than this, we encounter a third Antiochus ‘Epiphanes’ (with some suspiciously late Republican Roman name elements, too: Gaius Julius) who we find to have been contemporaneous with the emperor Hadrian. And, again, “in whom Greek, oriental, and Roman cultural attitudes mingled”.

Although this new Antiochus is considered to have been a person separate from Hadrian, but a friend of the emperor’s, ‘their’ contemporaneity is, in our new context of Hadrian as potentially Antiochus IV ‘Epiphanes’ himself, most intriguing.

The following is a conventional account of our ‘new’ Antiochus during Hadrian’s visit to Athens: https://erenow.com/biographies/hadrian-and-the-triumph-of-rome/14.html

CALL OF THE EAST

In 112 Hadrian made his way to Athens for an extended stay. This is his first recorded visit, although (as has been seen) it is possible that his father took him there when a young child. Also, he may have been in Athens a few years before, during the fallow period after his consulship. A man of some importance in the state, Hadrian doubtless journeyed in style with a considerable entourage; it was the done thing for elite wives to accompany husbands on their travels, so the little-loved Sabina was probably present.

After the short ride from Piraeus—or possibly walk, for he enjoyed exercise—Hadrian arrived at his destination. Once through the city gates, Hadrian found himself in a broad avenue, the Panathenaic Way; on either side were colonnades, with statues of famous men and women along their front, as the street passed through an industrial district, the Kerameikos, or Potters’ Quarter, and led into the Agora, or marketplace.

Hadrian was well aware that Athens had long lost its political importance, but it was a cultural center with a thriving intellectual life: a rough modern analogy would be Paris in the first half of the twentieth century. This was what appealed to him. Civic buildings also contained countless works of art. In the Propylaea, the grand (and still very beautiful) marble gateway up to the Acropolis, there was a picture galley. On every corner there were shrines, temples, statues, and altars. It was as if the city was a vast open-air museum celebrating the achievements of Greek civilization.

The rich and well connected did not expect to stay at the various inns and hostels that could be found in most cities. A local worthy—perhaps a friend or acquaintance—or government official would offer generous hospitality. The name of Hadrian’s host at Athens has not survived, but we can make a guess. One possibility is Gaius Julius Antiochus Epiphanes Philopappus. He was one of a breed of rootless multimillionaires in whom Greek, oriental, and Roman cultural attitudes mingled.

His name contains his history: “Gaius Julius” signifies Roman citizenship, but he was of Asiatic origin, being the grandson of Antiochus IV, the last king of Commagene, a region of ancient Armenia just to the east of Cilicia … one of the wealthiest of Rome’s tributary kings. ….

His grandson was evidently fond of him, for his cognomen Philopappus means “lover of his grandfather.” He spent most of his time in Athens, where he became an Athenian citizen and a member of the Besa deme, or district. A generous patron of the arts, he funded cultural and athletic events. Philopappus took care to keep his lines open to senior government officials; he became a Roman senator and was a suffect consul in 109.

This was a man who enjoyed living lavishly and prominently—as his other cognomen, Epiphanes, or “illustrious,” indicates. He became a celebrity in the modern sense of the word, famous for nothing in particular except for conspicuous expenditure. The Athenians nicknamed him King Philopappus. Hadrian became a good friend of his and Sabina made much of his sister, a poet and bluestocking, Balbilla. The siblings will have been of special interest to him, for magic had been a family tradition: two of their ancestors were celebrated astrologers ….

There had been no emergency—political, military, or personal—forcing Hadrian to take to sea during the perilous winter months, so we may assume that he traveled in late spring—say, from May onward. He was well received, for almost immediately the Athenians offered him citizenship, which he accepted without demur, and, as with Philopappus, made him a member of the Besa deme. They then awarded him their highest honor, appointing him archon, or chief magistrate: only a handful of leading Romans had been so distinguished …. The official year ran from summer to summer and Hadrian took office immediately.

The new archon was soon hard at work, helping to ensure that the Panathenaic Games of 112 were a success. Philopappus was doubtless on hand to offer support (we know he was interested, for at some stage in his career he was appointed agonothetes, or games producer). The games were held every four years in the year preceding an Olympiad, in the height of the summer. Both body and mind were tested to the extreme.

Hadrian, the inveterate Grecophile, is here even described as looking just like a Greek, like “a true Hellene and Ionian”:

He devoured the pursuits and customs of the Athenians, having mastered not merely rhetoric, but other disciplines too, the science of singing, of playing the harp, and of medicine: [he was] a musician, geometrician, painter, and a sculptor from bronze or marble who was next to Polycleitus and Euphranor [in artistry]. Indeed, like those things in a way, he, too, was refined, so that human affairs hardly ever seem to have experienced anything finer.

Now in his mid-thirties, Hadrian was in the prime of life. He was tall and very strongly built, but elegant in appearance, with carefully curled hair. According to Dio Cassius, he was “a pleasant man to meet and possessed a certain charm.”

His features were reasonably good-looking, with a strong nose, high cheeks, and puckered eyebrows. He looked about him with an alert, even suspicious gaze. Flatterers said that his eyes were “languishing, bright, piercing and full of light,” signs of a true Hellene and Ionian. ….