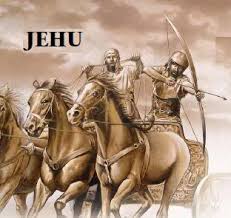 And as Jehu entered the gate, [Jezebel] asked,

‘Have you come in peace, O Zimri, murderer of your master?’

Following the pattern of kings and events that I have established in my articles revising the biblico-history of the northern kingdom of Israel, Zimri, who destroyed the House of Baasha, could only be Jehu, who wiped out the entire House of Ahab (= Baasha).

This suspicion is strengthened by the fact that Queen Jezebel actually refers to Jehu as ‘Zimri’ (2 Kings 9:31):

Some translations of this verse go to extremes to make it clear that Jehu and Zimri are, as is generally thought, two different kings. For instance, Contemporary English Version offers this: “As he walked through the city gate, she shouted down to him, “Why did you come here, you murderer? To kill the king? You’re no better than Zimri!””

The Hebrew does not appear to me to justify such a translation, “You’re no better than Zimri!”

Conventionally speaking, Zimri, of course, had preceded Jehu by about 45 years.

However, one is left thinking that there must be more to Zimri than his impossibly short reign (I Kings 16:15): “Zimri reigned in Tirzah seven days”, the shortest reign of all the kings.

Consequently, articles have been written suggesting that Zimri was ‘no flash in the pan’.

As soon as he began to reign and was seated on the throne, he killed off Baasha’s whole family. He did not spare a single male, whether relative or friend. So Zimri destroyed the whole family of Baasha, in accordance with the word of the Lord spoken against Baasha through the prophet Jehu— because of all the sins Baasha and his son Elah had committed and had caused Israel to commit, so that they aroused the anger of the Lord, the God of Israel, by their worthless idols.

So he died, because of the sins he had committed, doing evil in the eyes of the Lord and following the ways of Jeroboam and committing the same sin Jeroboam had caused Israel to commit.

As for the other events of Zimri’s reign, and the rebellion he carried out, are they not written in the book of the annals of the kings of Israel?

This all sounds just like Jehu – substituting Ahab for Baasha (2 Kings 10:17):

When Jehu came to Samaria, he killed all who were left there of Ahab’s family; he destroyed them, according to the word of the Lord spoken to Elijah.

So Jehu destroyed Baal worship in Israel. However, he did not turn away from the sins of Jeroboam son of Nebat, which he had caused Israel to commit—the worship of the golden calves at Bethel and Dan.

As for the other events of Jehu’s reign, all he did, and all his achievements, are they not written in the book of the annals of the kings of Israel?

though without his having any thought that Jehu might have been Zimri (pp. 203-204):

A number of arguments have been presented by scholars who have attempted to explain the somewhat cryptic words of Jezebel to Jehu when he entered the palace gate of Jezreel: hăšālôm zimrî hōrēg ̓ădōnāyw (“Is it well [with] Zimri, murderer of his lord?” or “Is it peace …?”).

Is Jezebel trying to seduce Jehu, as S. Parker recently argued? …. Is she assuming a defiant posture and taunting him proudly? …. Or is the narrative simply too ambiguous to determine her motives? …. What is the writer’s use of the name Zimri meant to convey? Undoubtedly, Zimri in biblical Hebrew is a hypocoristicon of a fuller name like … zamaryaw/ -yahū. “Yahweh has protected” or “Yahweh has defended”, from the root zmr … “to be strong”. …. A Samaria Ostracon of the early eighth century BCE preserves the name, b‘lzmr, and the name zmryhw appears on a Hebrew seal.

Now the historical Zimri, to whom Jezebel no doubt alludes … was a chariot commander who killed his king, Elah the son of Baasha and all and all of Baasha’s house, and ruled over Israel for only seven days.

Mackey’s comment: While Saul M. Olyan will continue on here with what is the apparent sequence of events in the biblical narrative, with Omri succeeding Zimri, I personally think that the Gibbethon incident where Baasha puts an end to king Nadab (House of Jeroboam) (I Kings 15:25-28) may have been partially re-visited with Omri now supposedly besieging Gibbethon, and then succeeding Zimri – which I do not believe could actually have been the case.

In reaction to Zimri’s coup, the army made Omri king. Zimri perished by suicide in Tirzah soon after (1 Kgs 16:8-20). These events occurred in the twenty-seventh year of Asa’s reign [sic] in Judah (ca 886) … only about forty–five years before Jehu’s own coup. The parallels are obvious and striking. Jehu, like Zimri before him [sic], was a chariot commander who conspired against his lord the king, and wiped out the ruling house in the fashion of the popular northern coup (see 2 Kings 10). In light of these close parallels, the arguments of Parker, who claims that Jezebel was not taunting Jehu when she called him “Zimri,” …. are less than convincing. Clearly, such an allusion to a recent, failed coup attempt by a fellow charioteer was intended as a taunt, as was the title hōrēg ̓ădōnāyw, “murderer of his lord”. Jezebel’s words imply that Jehu, like Zimri before him [sic], will fail: he will not last more than a week, and the people will not accept him, just as they did not accept Zimri. ….

For Queen Jezebel as a real historical person, see e.g. my article: