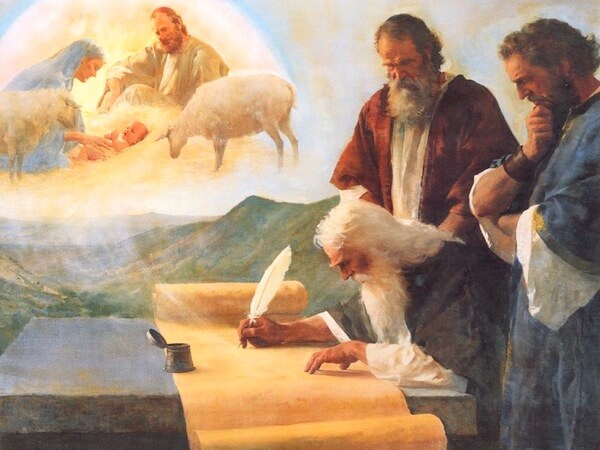 The long-lived prophet Isaiah has a Hebrew name (ישעיה) which means:

“Yah Is Salvation”, or “Salvation Of The Lord”.

He was the “son of Amos [Amoz]” (Isaiah 1:1), who is generally considered to have been the same as the prophet Amos.

Isaiah witnessed for Yahweh during the reigns of this succession of kings of Judah (1:1):

Jeroboam II, for instance, being one of these as we shall see.

Probably following the footsteps of his father Amos, whom Yahweh had called from Judah to witness at Bethel, in the northern kingdom (Amos 7: 10, 15), Isaiah, at some stage, headed northwards.

We know him in this guise as the prophet Hosea, of an almost identical-meaning Hebrew name (הושע):

Hosea, as well as witnessing for Yahweh during the very same succession of Judaean kings as had Isaiah (Hosea 1:1): “Uzziah, Jotham, Ahaz and Hezekiah”, also included in his listing the above-mentioned “Jeroboam [II] … king of Israel.

The messages of Isaiah, Hosea, are very similar.

Also, the names of the children of Isaiah, of Hosea, as well as that of the father, were meant to be signs and symbols, “a sermon to the nation” according to one commentator.

The prophet was not confined to the north, of course.

He would have returned to Jerusalem at least for the great feast-days.

On one occasion he famously encountered King Ahaz of Jerusalem (Isaiah 7).

For example, when King Hezekiah was grievously ill (2 Kings 20), the prophet predicted 15 more years of life for the king (v. 6), and prescribed an efficacious cure for his illness (v. 7).

Now Isaiah may feature in Jerusalem again – and this is the new identification I am proposing for him – as “Asaiah, the king’s attendant” (2 KIngs 22: 12), who was sent by King Josiah (my Hezekiah) as part of a delegation to that mysterious prophetess, Huldah (v. 14).

She would, like Isaiah had done, predict a good outcome for the king because he had humbled himself before Yahweh in the midst his trials.

Isaiah is back in Bethel (or “Bethulia”) – which is the key (strategic) northern city of Shechem – when Sennacherib’s eldest son, Ashur-nadin-shumi – the “Holofernes” of the Book of Judith – invades the land with an 185,000-strong Assyrian army.

Isaiah is here called Uzziah, and he has apparently been given command of this most important of cities. For Uzziah is the chief magistrate of Bethulia.

His royal connections may have arisen form the his father Amos’s having been (according to Jewish Talmudic legend) the brother (in marriage?) of King Amaziah of Judah, and hence a member of the royal family.

Uzziah’s father and, finally, his tribe, are given in Judith 6:15: “Uzziah son of Micah, of the tribe of Simeon”. That makes Micah, Amos, and so it is little wonder that the prophet Micah has been called “Amos redivivus”.

These were the glory days, with Israel’s great victory over the seemingly invincible Assyrians!

Micah, who had witnessed successfully during the reign of King Hezekiah (Jeremiah 26:18), would have died before the Judith incident.

But Isaiah lived into the next reign, that of Manasseh, when legend has him martyred.

He is, I believe, referred to in the Book of Jeremiah as having been chased down into Egypt by the minions of King Jehoiakim (who is my Manasseh), and murdered. Jeremiah calls him Uriah (or Urijah).

And we finally learn where Isaiah may have resided when in Judah, Kiriath Jearim (Jeremiah 26:20-23):