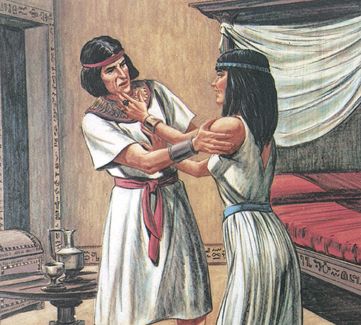 A parent’s favourite, given a special cloak, sold out by brothers, mocked, sexually harrassed, emerging from the desert on a spices-laden camel train, imprisoned, though much admired, capable of good management, ruling in Egypt as second only to Pharaoh.

These are just some of the similarities that Tamar at the time of King David shared with Joseph.

This article presupposes my multi-identifications of Tamar as developed in:

“Conclusion 2: Abishag, of uncertain name, the same as Tamar (her given Hebrew name), hailing from Shunem, was hence “the Shunammite” of King Solomon’s Song of Songs. Ethnically, she may have been Egypto-Canaanite, which thought will lead to the consideration … that she was also Velikovsky’s Hatshepsut = “Queen of Sheba”.”

Some of the Comparisons

The “Shunammite” was (Song of Solomon 6:9): “… the favourite of her mother, perfect to the one who gave her birth”, but mis-treated by her brothers (1:6): “My mother’s sons [brothers] were angry with me and made me take care of the vineyards”.

Tamar “was wearing an ornate robe, for this was the kind of garment the virgin daughters of the king wore” (2 Samuel 13:18).

The exact same Hebrew words to describe “ornate robe”, or “coat of many colours”, are used in the case of Joseph and of Tamar, ketonet passim (כְּתֹנֶת פַּסִּים).

Jacob sent Joseph to his brothers (Genesis 37:13): ‘As you know, your brothers are grazing the flocks near Shechem. Come, I am going to send you to them’.

David sent Tamar to her ‘brother’, Amnon (2 Samuel 13:7, 8): “David sent word to Tamar at the palace: ‘Go to the house of your brother Amnon and prepare some food for him’.

Joseph asks a man at Shechem (Genesis 37:16): ‘I’m looking for my brothers. Can you tell me where they are grazing their flocks?’

Similarly the Shunammite asks her beloved (Song of Solomon 1:7): ‘Tell me, you whom I love, where you graze your flock and where you rest your sheep at midday’.

Tamar was a pawn in a conspiratorial plot by Absalom and his adviser to kill Amnon (see above article).

“So when Joseph came to his brothers, they stripped him of his robe—the ornate robe he was wearing” (Genesis 37:23).

Joseph’s brothers “looked up and saw a caravan of Ishmaelites coming from Gilead” (Genesis 37:25).

Were they “flock of goats”-like?

(Song of Solomon 4:1): ‘Your hair is like a flock of goats descending from the hills of Gilead”.

“Their camels were loaded with spices, balm and myrrh, and they were on their way to take them down to Egypt” (Genesis 37:25).

“… his brothers pulled Joseph up out of the cistern and sold him for twenty shekels of silver” (Genesis 37:28).

“Solomon had a vineyard in Baal Hamon; he let out his vineyard to tenants. Each was to bring for its fruit a thousand shekels of silver” (Song of Solomon 8:11).

‘I liken you, my darling, to a mare among Pharaoh’s chariot horses’ (Song of Solomon 1:9).

“Reuben returned to the cistern and saw that Joseph was not there, he tore his clothes. He went back to his brothers and said, ‘…. Where can I turn now?’ (Genesis 37:29, 30).

‘What about me? Where could I get rid of my disgrace? And what about you? You would be like one of the wicked fools in Israel’ (2 Samuel 13:13).

“Then Jacob tore his clothes, put on sackcloth and mourned for his son many days. All his sons and daughters came to comfort him …” (Genesis 37:34-35).

“The king stood up, tore his clothes and lay down on the ground; and all his attendants stood by with their clothes torn” (2 Samuel 13:31).

Given the above similarities, it would be no accident that the narrative concerning Joseph is suddenly interrupted by Genesis 38, the account of Judah and another “Tamar” who is treated with some disrespect by Joseph’s brother, Judah.

“Joseph found favour in his eyes and became his personal attendant. Potiphar put him in charge of his household, and he entrusted to his care everything he owned” (Genesis 39:4).

“And Achitophel said to Absalom. ‘Go in unto thy father’s concubines, which he hath left to keep the palace …’ (2 Samuel 16:21).

“… they searched throughout Israel for a beautiful young woman and found Abishag, a Shunammite” (I Kings 1:3).

“… Hatshepsut still described herself as a beautiful woman, often as the most beautiful of women …” (https://en.wikipedia.org/wiki/Hatshepsut).

{So Judah with the other Tamar ‘Come now, let me sleep with you’ (Genesis 38:16), before his having to concede: ‘She is more righteous than I …’ (v. 26) – something Amnon would fail to do in the case of the other Tamar}.

“But he refused. ‘…. My master has withheld nothing from me except you, because you are his wife. How then could I do such a wicked thing and sin against God?’” (Genesis 39:8, 9).

‘When he heard me scream for help, he left his cloak beside me and ran out of the house’ (Genesis 39:15).

“Joseph’s master took him and put him in prison, the place where the king’s prisoners were confined’ (Genesis 39:20).

“[Amnon] called his personal servant and said, ‘Get this woman out of my sight and bolt the door after her’.” (Genesis 39:17).